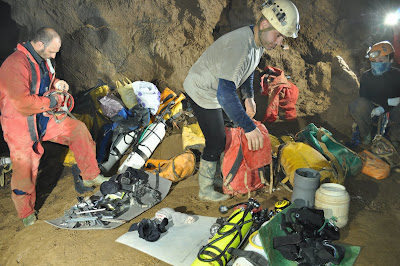 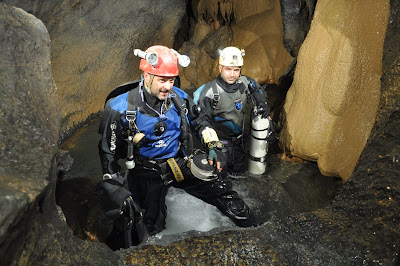 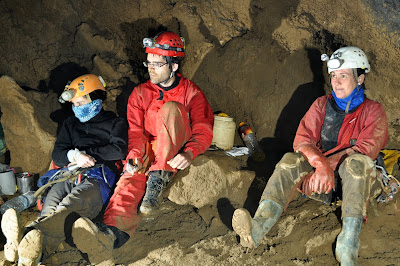 Easter holiday has begun and after a good while away from Lezate due to ongoing exploration of other caves, we have now decided to have another go at it by trying to find an underwater passage.
Today was mainly dedicated to carrying all the diving equipment necessary for the next few days, and having a first look at the siphon.
Early reports from another diver in the Bermeo area had already suggested that the water could be clear, and this was later confirmed by Antua upon entering the siphon, saying it had very good visibility. Other attempts had been made in this siphon before but the dives abandoned due to bad visibility.
In the next couple of days, depending on weather and water conditions, Antua and Ritxar should be diving again.

To wash off the sweat of carrying 10 loaded tackle sacks into the cave, some decided to make their way back through the river. Quite a beautiful stretch, punctuated with small cascades, if somewhat wet and cold. Small people should expect an almost neck deep and literally breathtaking experience.

A side note here with a thumbs up for the carbide light that has kept us warm inside the cave while we were all soaking wet waiting for our cave-diving mates.

This work by ADES is licensed under a Creative Commons Aitortu-PartekatuBerdin 3.0 Unported License